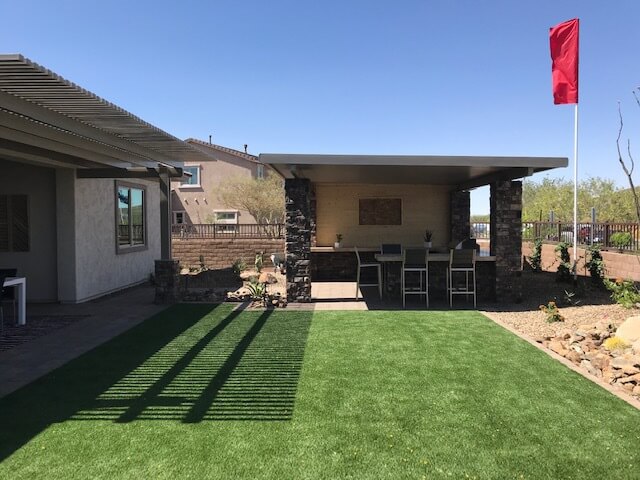 As a homeowner, when you’re overhauling your Phoenix, AZ landscape, one of the most important things to consider is the type of lawn you want. Even in an arid climate where dirt is the norm, you can have lush grass that leaves your neighbors green with envy! It just takes a team with the know-how to install and help you maintain your outdoor space throughout the year.

When you’re considering your next full landscaping project, don’t forget the lawn! Here we cover the basics of transforming dirt into an oasis.

Importance of Choosing the Right Type of Grass

When choosing grass, you have to pay strong attention to not only the climate but also the soil quality. Many varieties do not do well in highly alkaline soil or in sandy soils, which may require extra fertilization or supplements to bring it to a manageable level.

Warm-season grass is a necessity in AZ simply because it thrives in hotter, dryer weather. However, cool-season varieties can help keep your lawn looking fabulous throughout the year when the warm-season grass goes dormant. Desert grass has to be selected carefully.

If you install or plant the wrong types of grass, you’re going to find yourself with brown spots or going through seasons where no green grows at all.

Get the Latest from the Straight Line Blog

Sign up for updates from our Phoenix landscape design blog. As you'd expect, you’ll only get quality content from us, and we'll never share your email for any reason.

Straight Line works with several types of grass, all of which not only withstand the hot sun of the desert climate throughout the year — they thrive. You’ll want to pick varieties that complement your landscaping and work with the features you’ve chosen. 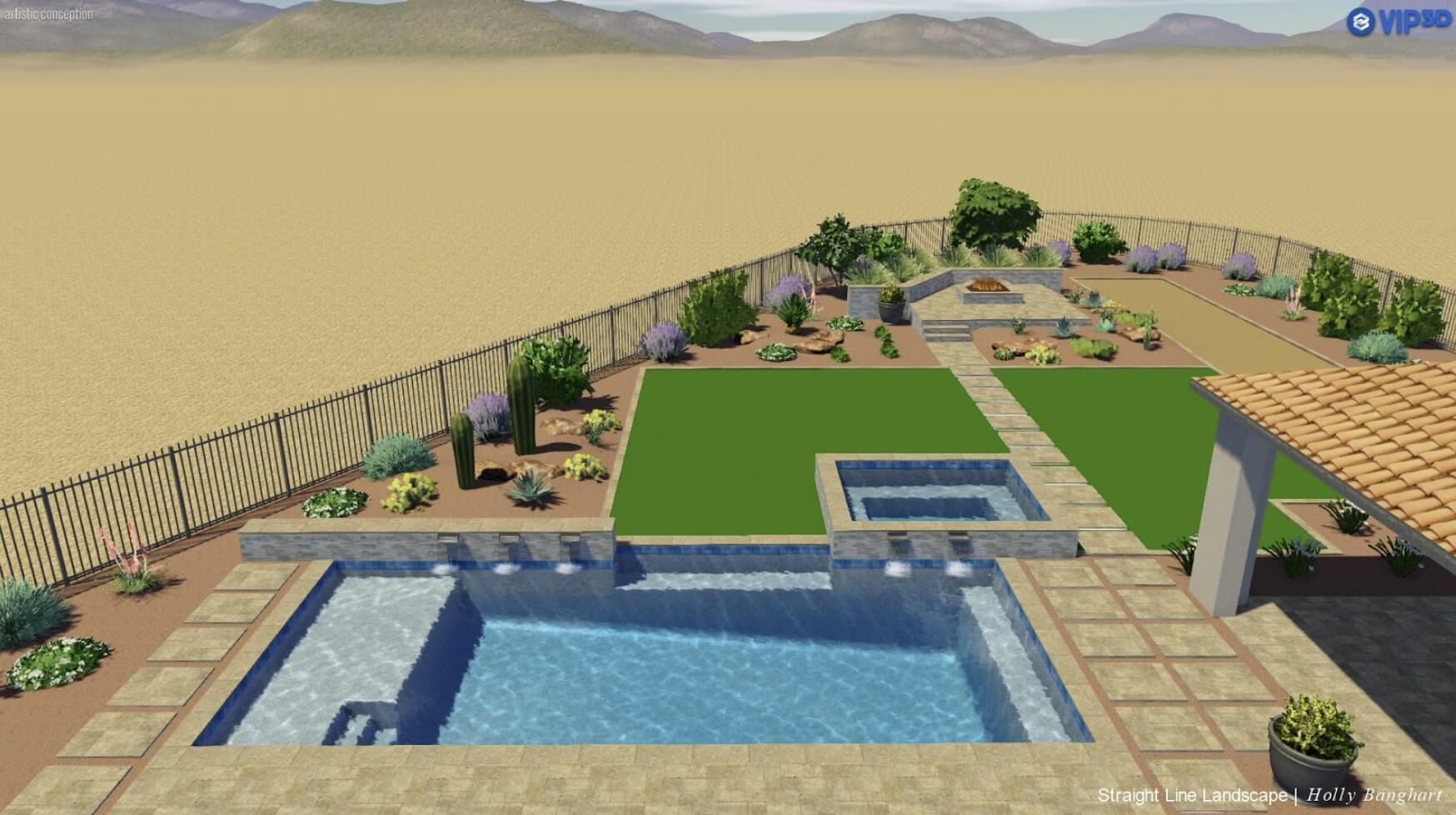 One of the most popular types of real grass in the southern states, Bermudagrass has been around since the 1800s. It’s a warm-climate brand that tolerates the heat and even droughts very well. This is good news for those in Phoenix, who experience quite a bit of both throughout the year.

It has a green-gray appearance and typically grows 1″ to 4″ in length. The typical maintenance length is 1 to 1-1/2″, which might mean extra mowing during the active months.

Bermudagrass is best for lawns that have full sun exposure, with few shady areas. Good drainage is a must and its extensive root system — roots can grow up to 6′ deep — means it’s more resilient than most other types of warm-climate grass.

If you’re constantly walking on the lawn, you’ll be surprised at just how well it holds up. It’s not uncommon to find flat, worn areas in any type of grass, but you won’t have that issue with Bermudagrass, which is why it’s often used on athletic fields in addition to high-quality lawns. It’s best planted in the spring, as it grows during spring and hot summer months. Bermudagrass is also perennial, meaning it comes back yearly.

If you’re looking for thick-blade natural grass, look no further than St. Augustine. It’s dark green in appearance and maintains its color, even during long drought periods, especially when compared to other brands. Because St. Augustine grass is coarse, it hides flaws in your lawn pretty well, particularly the appearance of weeds.

Customers looking for this type of grass will have to buy it in either plug or sod format, because it doesn’t come in seeds for commercial use.

It does require more moisture than Bermudagrass, and tell-tale signs of withering include the blades turning blue-gray and not bouncing back after you walk over it. It’s not necessary to overwater your lawn with St. Augustine grass, but it does need to be consistent.

It’s also not ideal for high-traffic areas, so those who are constantly active in the yard may need something hardier.

Midiron is actually a hybrid Bermudagrass, meaning it’s a warm-season blend. It offers the same features, such as high tolerance to heat, droughts and traffic. It also thrives well in the dormant (winter) season and benefits from overseeding during this period.

The blades have a coarse texture and it has a blue-green color appearance. Like Bermudagrass, the root system is extensive, and it’s one of the most sought-after grass types in Arizona.

Perennial ryegrass differs from the others above in that it’s a cool-season grass. What does this mean for Arizona lawns? Overseeding with this between the warm seasons ensures your grass still looks luscious when temperatures drop and the warm-season varieties go dormant.

Perennial ryegrass doesn’t live a long time, but it thrives during the fall through spring months until the warm-season grass blooms again. It’s also known to be disease- and insect-resistant and a quick germinator, so you can expect your lawn to grow into mowable length in about three weeks.

Like the Midiron, Tifway 419 is a hybrid Bermudagrass blend. It can stand up to excess traffic so much so that it’s often used in athletic fields and on golf fairways.

The difference is its texture which is very fine. It’s dark green in color and like perennial ryegrass, it’s disease resistant. Where many grasses have a mowable length of 1″ to 2″, Tifway 419 does well when it’s mowed closer to the ground, typically around 1/2″ to 3/4″.

It’s tolerant of the colder months, meaning you could use it as a full-season lawn in the Phoenix area without having to worry about warm- and cold-season overseeding. 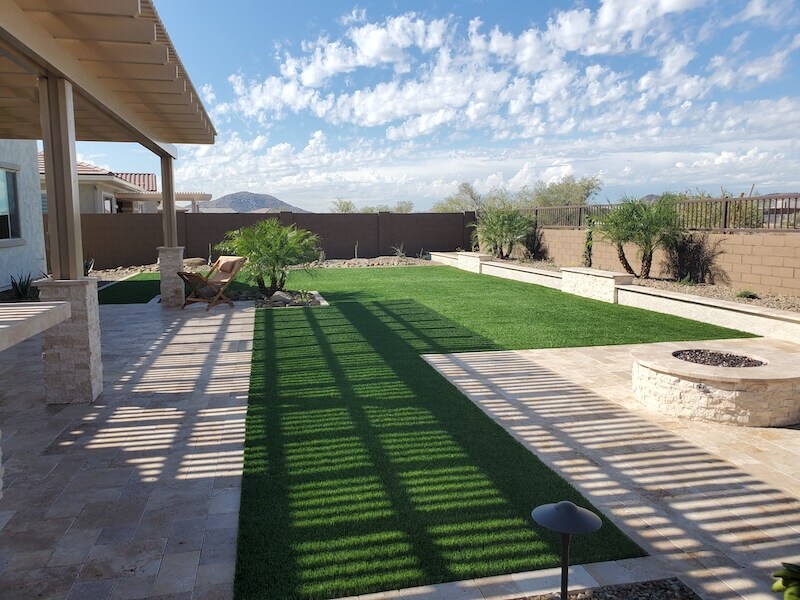 Customers looking for low-maintenance lawns will undoubtedly be happy with synthetic turf. Unlike the other varieties mentioned above, artificial green turf doesn’t require a blend of cold- and warm-season germination. Instead, this artificial lawn material may, from time to time require infill, which is easily done and less involved than replacement or reseeding a traditional grass lawn.

There’s no growing time, either. Artificial turf for Phoenix residents is laid out and ready to use the day your landscaping team completes the artificial grass installation. While synthetic grass is often used in commercial properties or on sports fields and artificial putting greens, it works very well on residential lawns, too. It never loses its color and helps with environmental water conservation efforts as your water usage will be drastically reduced.

In addition to choosing your grass based on its use, another important consideration is the types of lawn features you plan to build or have installed outside. Here are just a few of our recommendations.

Who doesn’t like a good seating area outside? Maybe it’s a standalone feature or part of your outdoor kitchen. Regardless, you want to tie in the complete look so having your lawn looking pristine means it’s showcase ready every day. Here, you’ll want a hardier blend of grass, such as the Bermudagrass or one of its hybrids. Chairs do a number on the grass and these varieties can stand up to the wear and tear.

If you have kids or are just very adventurous, fun-loving adults, you might have a trampoline in your backyard. This means lots of traffic to the area, and you’ll need a hardy grass like midiron that springs back from not only the foot traffic but also the areas underneath the trampoline frame. 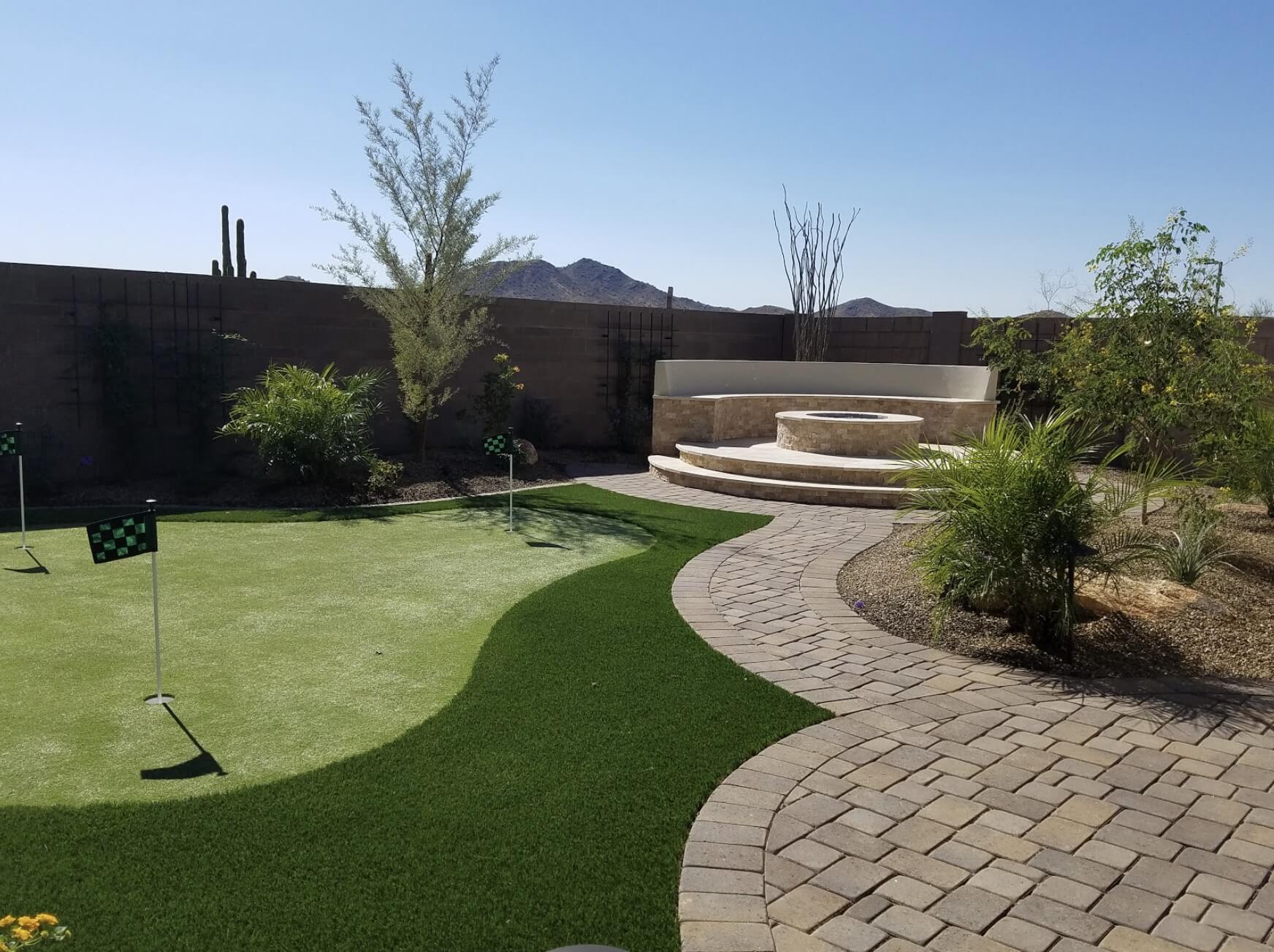 If you’re an avid golfer, you might just want a putting green installed in your backyard, and why not? After all, home is where the heart is and if yours insists on banking those hole-in-ones, who are we to stop you? Here, we recommend artificial turf or Tifway 419.

A pergola is a great place to set up day or night and enjoy time with your family or settle down to read a book while still enjoying the gorgeous weather outside. Around the pergola, a dark green grass will help your feature pop. Midiron or Tifway 419 are good solutions here.

Just thinking about sitting around the fire in the evening is relaxing, so of course, you want this area to look its absolute finest. Truthfully, any type of grass will look good here, but it’s a great idea to choose a variety with color features that complement your fire pit. 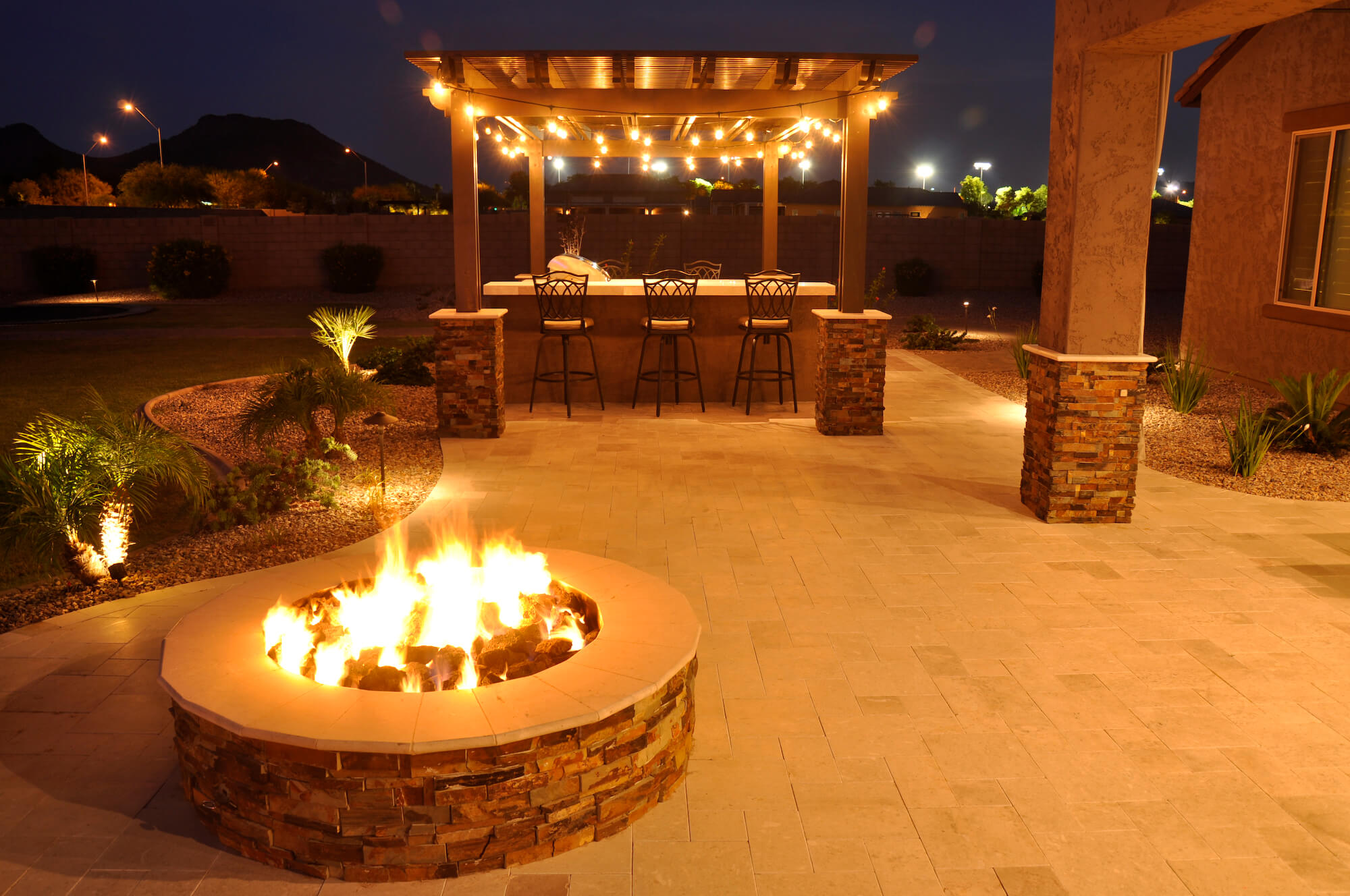 Because of the dry climate, watering is important, but so is the watering schedule. Overwatering is possible, even in Arizona. Your landscape team will give you full maintenance instructions upon completion of your project, but here are some tips.

If you overwater your lawn, it can suffocate. The reason being that the excess water prevents your grass from getting enough oxygen. Each variety has different watering instructions, so be sure to talk to your landscaping team and follow instructions.

Signs of overwatering include:

There’s definitely such a thing as underwatering, especially in Arizona where the climate is dry to begin with and natural moisture is often lacking. When the grass fails to receive enough water, it begins to do one of two things: die or go dormant. However, it’s pretty easy to fix if you catch it in time. Just pay careful care and implement a consistent watering system based on the variety your lawn grows.

Signs of underwatering include:

HOW STRAIGHT LINE CAN HELP

Straight Line offers all types of complete landscaping projects and we provide full guidance on all of the products we use. Additionally, our work falls under warranty. After your project’s complete, we want to see you completely satisfied, and we’ll support you in maintaining your property throughout the year.

REFER STRAIGHT LINE TO A FRIEND

You dream it. We design and construct it. You enjoy it.

Get inspired by quality landscaping

CHECK OUT OUR GALLERIES

Want to learn more about how we work?

What was important is we got to see their work. When we hired SLL, they were here working on our house every day. They started it and they worked on it until it was finished.

Ready to Talk About Your Project?